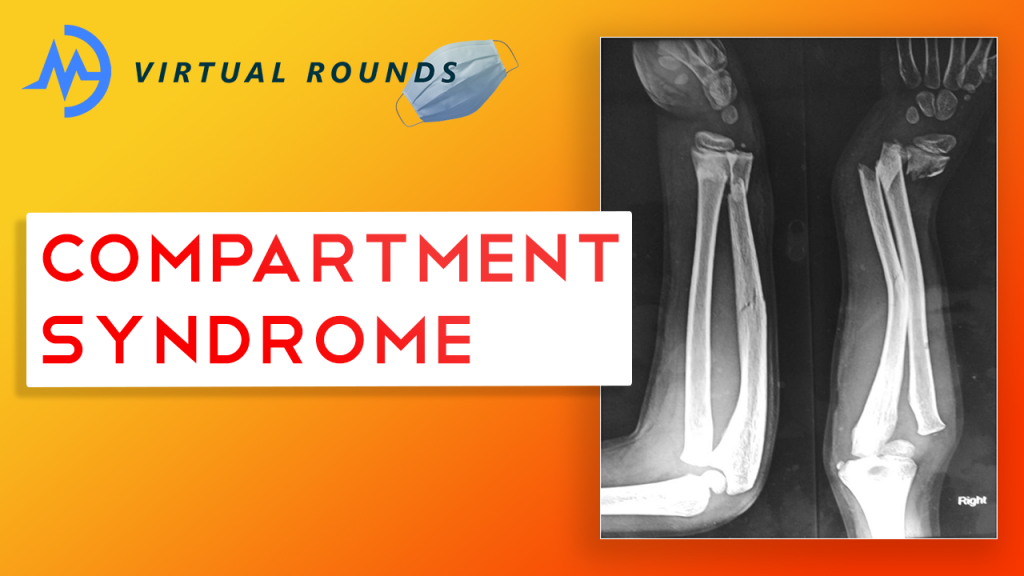 Throughout each premed virtual shadowing session, you will actively participate by answering and asking questions about the week’s proposed case. Like an in-person shadowing experience, we strive to stimulate students intellectually and ultimately reaffirm their interest in medicine.

Compartment syndrome is a dangerous condition which results in increasing inflammation within the affected compartment (typically muscle) and leads to increasing pressures and eventual irreversible ischemic damage to the muscle, nerves, and vasculature. Musculature compartments are defined by their separation via fascial layers (a connective tissue). Fascia is not flexible, so when swelling occurs, the affected compartment gets tighter but is not able to expand to compensate for the increasing pressures. It is considered a surgical emergency and requires a procedure called a fasciotomy in order to save the affected limb. It commonly occurs in the lower extremities, but is also possible in other areas of the body, such as the abdomen. It is generally caused by trauma, casts for broken bones which are set too tightly, and burns resulting in circumferential eschars (scabs).

Medical Jargon (revisit this section as you go through the case and physical exam so you understand the terminology).

A 28-year-old female presents to the emergency department with a chief complaint of right lower leg pain. Patient states that about 2 hours ago she was in her yard cutting down trees when a large branch suddenly fell onto her right lower leg, briefly pinning her to the ground. After the branch was removed, she noted immediate sharp pain, redness of the skin, and tenderness to touch. Since the incident, she has developed worsening sharp pain and decreased sensation to touch. She is not able to bear weight on the leg and has minimal ability to move her right toes and ankle. She has tried icing and ibuprofen for the pain, but says nothing is making the pain better. She says her leg is feeling “tight” and the pain has become unbearable. She is worried that she broke a bone and would like to get imaging…

In order to best treat your future patients, you must think carefully about your assessment (differential diagnosis) and be able to rule out the other conditions that may develop in a similar fashion. For our patient, we want to consider the following:

Fill out this form throughout the session: